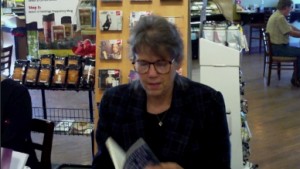 Sheryl is from Marysville, Kansas. She graduated from South Dakota State University with a B.S. in Family Relations and Child Development.

She has had over 4,500 poems, stories and articles published. Some of the magazines, anthologies and textbooks that have used her work are: Reader’s Digest, Modern Maturity, Kaleidoscope, Capper’s, Grit, Country Woman, Poetry Now, Confrontation, Strings, This Delicious Day, The American Anthology and Men Freeing Men.

Thirteen collections of her poetry have been published. Some of them are: Their Combs Turn Red In The Spring, The Oketo Yahoos, Strawberries and Rhubarb, Rural America, Land of the Blue Paloverde, Friday Night Desperate, Aunt Emma Collected Teeth, Secrets of the Wind, Howling At the Gibbous Moon and Greatest Hits 1978-2003.

She has taught writing and poetry classes at conferences, colleges and schools in Texas, Oklahoma, Arizona and South Dakota. She recently taught workshops at Amarillo College, The University of Texas at Dallas, Abilene Christian University, Tarleton State University, the Society of Children’s Book Writers Conference in Arlington, Texas and at the Tarrant County College. She was a Bread Loaf Contributor at the Bread Loaf Writer’s Conference, Middlebury, Vermont.

She was Editor of Oakwood, the SDSU literary magazine. She was a Contributing Editor to Byline, a national writers’ magazine and to Streets, a national literary magazine. She was the Editor of Crawford’s Chronicles, an insurance trade publication. She has been a staff writer for several newspapers and magazines. She is currently the Fiction/Non-Fiction Editor of The Pen Woman Magazine, the national magazine of the National League of American Pen Women.

She is a member of the National League of American Pen Women, The Society of Southwestern Authors and Trinity Writers Workshop.

She makes a living as an insurance adjuster. She is also a painter, a weaver and an old dirt biker.